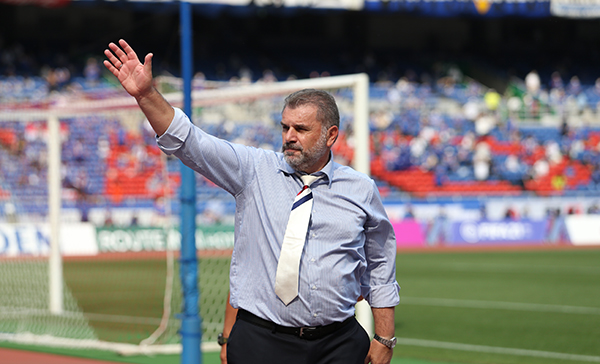 The club and the manager Ange Postecoglou have mutually agreed to terminate his contract. He will leave the club and set to become the manager of Celtic FC (Scotland).

It was a difficult desicion to make in the mid-season as the team currently competing in a great form.

The club wish "Boss" nothing but the best on his new challenge in football manager career. He will alway be part of Marinos Family. And last but not least, we thank him for leading and guiding the team to J.LEAGUE Championship in 2019. His legacy and great achievement will forever remain with our club history.

Three and a half seasons in charge, Postecoglou have recorded 58 win, 18 draw, 42 loss in 118 J.LEAGUE matches.

To the Marinos Family

Unfortunately my time at the club has come to an end. After 3 and half years I have made a decision to move on to a new challenge.

Words cannot express the feeling of gratitude I have towards everyone involved at the football club.

From the board of directors to the staff, this special group of players, and finally the most passionate supporters in the country, everyone has given me the best support any manager could want.

When I arrived my vision was to make Yokohama F.Marinos the most talked about team in Japan. I wanted to have success but also play football that would make everyone proud of our Football club.

It was not an easy path we chose and there were many challenges, but we never stopped believing that we could create something special. There have been many great moments, none better that our J.League Championship win in 2019. I will always remember that final game at Nissan Stadium.

I was also proud of the excitement we gave our supporters. We played some brilliant football at times and never stopped trying to improve in every area. We have had players represent the National Team and others follow their dreams in Europe. We have achieved so much.

On behalf of my family and I, I would like to thank the staff, the players and all our fantastic supporters. We have missed you this last 18 months.