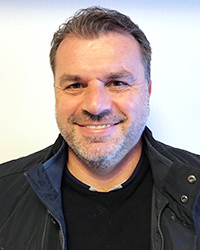 YOKOHAMA F・MARINOS announced today that Ange Postecoglou will join the Club as its new head coach next season. Postecoglou joins following his departure from the Australian national side, the Socceroos, last month, where he successfully qualified for the 2018 FIFA World Cup. Postecoglou will replace outgoing coach, Erik Mombaerts, who will be leaving the Club when his contract expires at the end of the season.

Postecoglou, an Australian national, who was born in Greece, has had success both at club and international level. He won the Australian League championship twice with Brisbane Roar and the 2015 AFC Asian Cup with the national team and has been named A-League Coach of the Year, the Australian PFA's Manager of the Decade for the first 10 years of the A-League and AFC Coach of the Year 2015. Known for possession-based, entertaining football, he has a strong background in developing young players, spending seven years with the Australian U-17 and U-20 teams. He took charge of the Socceroos in 2013, overseeing a competitive performance in the 2014 FIFA World Cup, before securing qualification for the 2018 Tournament.

Postecoglou said: "I am excited to be moving to Japan and returning to club football. Coaching YFM will be a great challenge and I am very much looking forward to working with the club’s players, and young players in particular, to achieve success".

Koichiro Furukawa, the president of YOKOHAMA F・MARINOS said: "Ange Postecoglou is an excellent coach, with an attractive and entertaining style of football which will suit our approach. At the Marinos, we are committed to developing players and Ange has a very strong record in doing this. We are confident that he is the perfect choice to take us forward".