YOKOHAMA F. MARINOS have announced that Head Coach Erik Mombaerts will be leaving the club at the end of season, when his current contract expires and will be returning to Europe.

The club have begun the search for a new Head Coach and will make an announcement following the conclusion of the season. 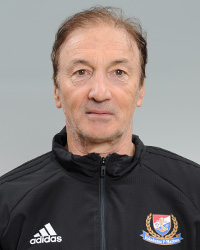 "I would like to inform you that next season, I will not be the Head Coach of Yokohama F. Marinos. It's been an incredible journey to discover the Japanese culture and honor to work in Japan for the last years."

"We've got moments when we struggled to get results and also beautiful memories spent together with the fans and the players."

"Now, I'm not thinking about the memories, my concentration and huge ambition is to obtain very good results until the end of the season to allow the team to reach the ACL for the 2018 season."

"I can see a lot of improvements at the individual and team level and I'm optimistic that we can achieve this objective."

"I'm deeply thankful to the fans for their support to our players, their encouragement have been giving us a lot of energy to fight until the end. Please keep coming and let's fight together until the last second of the season."

"Thank you again for all the support everyone has given me."